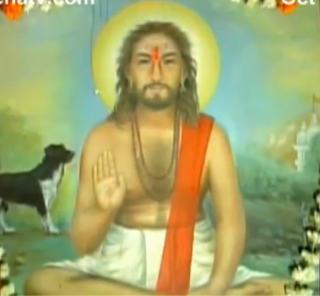 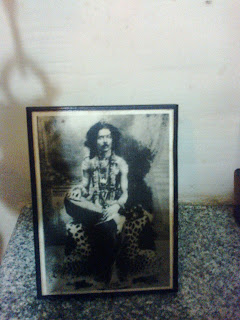 The song anandvada cidghana vastu na kanda I saw the absolute being which is pure and integral consciousness and bliss is by Nagalinga the saint of Navalgund in dharwar district.The poet Nagaling flourished in the middle of the last century.. We have discussed another important song of Nagalinga elsewhere,namely Yogigala lile pathawidu. this is the sportive path of the yogis.He is said to have had occult powers and therefore to have disappeared from the prison and appeared outside it even when all the doors were closed.
In the song under consideration.he describes very graphically
the multifarious and rich experiences he had in his spiritual life.I have seen the form of god says the poet. which was a solid embodiment of bliss and consciousness(Anandvada chidghana Vastu)I have seen the sunlight without the sun.It is only when one loses ones bodily consciousness that one attaihs to the state of self -realisation and visualises his own self .tanu allda tanna tadrupa maneyalli.. it is ones pious actions which lead to such an experience.The poet further says inside the ring of the heart,there is a blue mirror Inside which there is a circle. What is it that plays sportively whthin that circle?asks the poet .mandaladolagaduwadenamma He further tells us that he attained to the invaluable and beautiful form of god,when he reached the unmani or purely self conscious state by the grace of his Teacher. seriunmaniyolu
guruvinapunyadighana vastudorakituenagamma. The saint proceeds to describe some unique spiritual experiences I saw a Vata tree he tells us in the middle of the water. There were no flowers and yet there were small and tender as also ripe fruits on it and they were full of juice .Hivilla midigayi hannamma. In the illimitable dense forest that he saw in his vision There was a pitcher overflowing with nectar and the poet declares that he was leading a blissful and happy life by enjoying it time and again akhanda vannadolu amrut koda ukkiundundusukhisibaluvellama. What he saw in his vision was not Kailasa there were no ornaments of gold on the body of the god there .ie it was not Vaikuntha and yet what was it that moved sportively in the unlimited space there bailolagaduvadenamma. He finely confess it was due to the grace of his spiritual Teacher that he attained to the final and unchanging liberation Sthiramukti
Pathway To God in Kannada Literature page no256-257
Posted by anandjoshi at 11:13 PM No comments: Links to this post

poem of Guruling Jangam Maharaj
Posted by anandjoshi at 9:59 AM No comments: Links to this post

Posted by anandjoshi at 5:41 AM No comments: Links to this post

Sri Mahipathi Dasa was the son of Sri Koneri Rao, an orthodox and ardent devotee of Sri Hari. When Koneri Rao wanted to perform the Upanayana of his son, the astrologer who saw his horoscope predicted that Mahipathi would lead a royal life and become a sacred yogi.Mahipathi continued his early education with his father and became a popular scholar like him. He became very fluent in Sanskrit, Marathi, Hindi, Kannada, Urdu and Persian. His philosophical discourses were very popular and attended by thousands.
One day, Khawas Khan,  a minister in Adil Shah's court was passing by the Narasimha Temple in the town,  where Mahipathi Rao was conducting a discourse on Purana, and saw thousands of people listening to his  discourse. Khan listened  to his talk for some time and liked what he heard. He wanted a discourse to be conducted in his house too. Mahipathi immediately agreed to do so, as the Sultans were known for their brutality & also generosity, if they are happy.
The next day, Mahipathi conducted a discourse in Khan's house. He explained incidents from Bhagawatha, Ramayana etc in urdu and parsi, languages which the people in the ministe's house  understood. His discourse was so well liked that it became a practice and later on,  discourses were conducted both in Khan's house and the temple. Many muslims, including mullas, attended his discourse and appreciated his knowledge and scholarship in Puranas & Scripture.
Once, the Nawab's Lekhadars, Accountants  were in trouble,  as they could not rectify a mistake in their accounts. Some one in the Palace  suggested that Mahipathi Rao,  should be consulted as he was good at accounts. When Mahipathi verified the accounts , he immediately identified the error.
The Nawab was very happy and appointed Mahipathi as his courtier, as also a Manager of Accounts. Eventually, Mahipathi's sincerity and hard-work made him the Diwan of the Province.
Mahipathi married a girl called Tirumala, and led a very simple and austere life, even though he could afford luxuries and comforts. Still he continued eating Jola Bhakri & Akki Nucchu as earlier. He was not elated by the new post or power.
Turning towards the inner Self
In Bijapur, there lived a brother and sister called Shahanunga and Shahanungi. They belonged to the Soophi sect and were very popular as they could predict the future,  show their Mystic Powers. However, their existence and character seemed  a mystery. No one in Bijapur, knew where they lived, what they ate, or wore.  Most of the time they appeared nude & wore rags. They were very pious and respected by both Hindus and Muslims.
One day, Mahipathi was inspecting some construction work on the banks of  Begum Talab, a water tank. Shahanunga appeared from some where,   and was curious to know what Mahipathi had in his hand. Mahipathi  Raya told him that it was the Nawab' s Signatory Ringring (raja mudra) given to him as he was Diwan of the Province
Shahanunga  stretched his hand asking Mahipathi to give  him the ring and upon receiving it, threw it into the the tank. Mahipathi was scared as the ring was a symbol of the Nawab's position and power, and could not be trifled with.
He pleaded with Shahanunga to retrieve the ring. Shahnunga asked his sister to get the ring. She immediately  plunged into the tank and retrieved hundreds of identical rings from the water.
The baffled Mahipathi could not identify the Nawab's ring and requested Shahanunga to help him, whereupon Shahanunga retrieved his  original ring and uttering the words 'mouth kaa ghan, (smell of stinking dead body)   with this' and  he disappeared.
Mahipathi could not understand Shahnunga's utterance [mouth ka ghan  means smell of dead body] or its significance. After pondering about this for a while,  he gave up and decided to approach Shahnunga himself for an explanation. This was not easy as Shahnunga's whereabouts were difficult to predict. Finally, after great effort, Mahipathi finally met Shahnunga and prostrated before him, asking him to explain the significance  of his words and accept him (Mahipathi) as a disciple.
Shahnunga told him, I am not a Brahmana, like you,  to go to Bhaskar Swamy who was in Saravada and accept  him as your Guru.
Renouncing Diwangiri
After this Mahipathi Rao  decided  to give up his position and go to Bhaskar Swamy.The  Nawab was initially reluctant to let him go,  but as his Junior wife wanted her brother to have a seat of Power in Palace, agrred to relieve him after gifting wth Gold & wealth to Mahipati Rao. Even Tirumala was happy with Mahipathi's decision and decided to accompany him to Sarawada.
Bhaskar Swamy was very famous in Karanataka and Maharashtra. Even though Sarawada was a small village, his presence attracted a number of devotees, turning Sarawada into a piligrimage centre.Mahipathi and his wife went to Bhaskar Swamy for obtaining sacred and philosophical knowledge. Bhaskar Swamy accepted Mahipathi as his disciple and gave him Upadesha. He also blessed the couple to have illustrious children. Mahipathi and his wife stayed with Bhaskar Swamy for some time before going to their native place in Bijapur.
Later, Mahipathi went to Shapura village in Gulbarga district, where he selected the Sri Hanuman Temple on the banks of the Mandakini river for his Spiritual  activites. From then on, he became known as Mahipathi Dasa and composed many songs with the ankitha 'Mahipathi'. He spent the rest of his life conducting philosophical discourses, bhajans and other devotional activites.

Sri Mahipathi Dasa had two sons - Devaraya and Krishnaraya. Devaraya chose the career of a warrior and became the leader of some small army. Krishnaraya followed in his father's footsteps and became a haridasa,  Guru Mahipati Dasa and composed many songs. 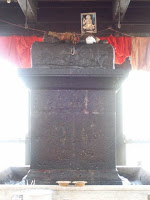 Posted by anandjoshi at 9:28 PM No comments: Links to this post 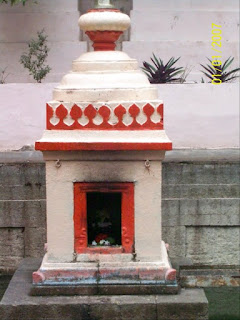 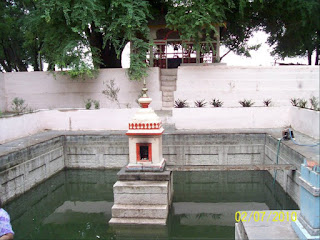 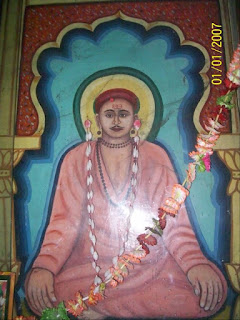 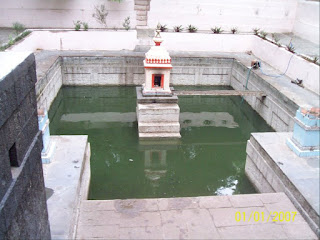 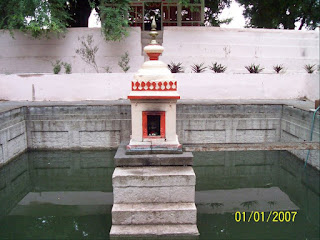 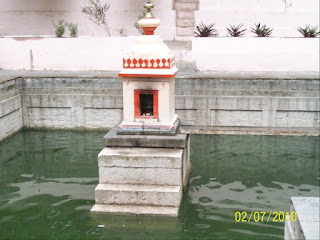 Posted by anandjoshi at 3:40 AM No comments: Links to this post 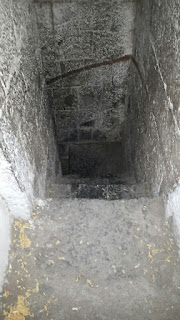 Posted by anandjoshi at 3:16 AM No comments: Links to this post