Karnataka In a remote bustling village of Nimbal in Bijapur district in Karnataka is the Kote Sankaralinga Dvikuta Temple. The temple's caretaker said it was built in 580 AD

but when I started viewing the pictures, I had taken in detail and studied about the architecture during that time, I figured it belonged to Hoysala era. So, it must have been built much later than the date stated. This is my conclusion. I am no authority so whatever I write in my post is my inference.

Nothing much is known about this east facing temple. I have made all attempts at deciphering the relics.

The Archeological Survey of India (ASI) has now undertaken the daunting task of renovation and figuring out the relics.

Hoysala Kingdom flourished in the South Deccan plateau, now Karnataka, from 10th century to 14th century. The architecture is not as elaborate as the more famous temples of that period, like Belur and Halebidu, and looks very basic, but the characters in the temple are very specific of Hoysala period architecture.
Hoysala era focussed in architecture, specially building of temples in South India. 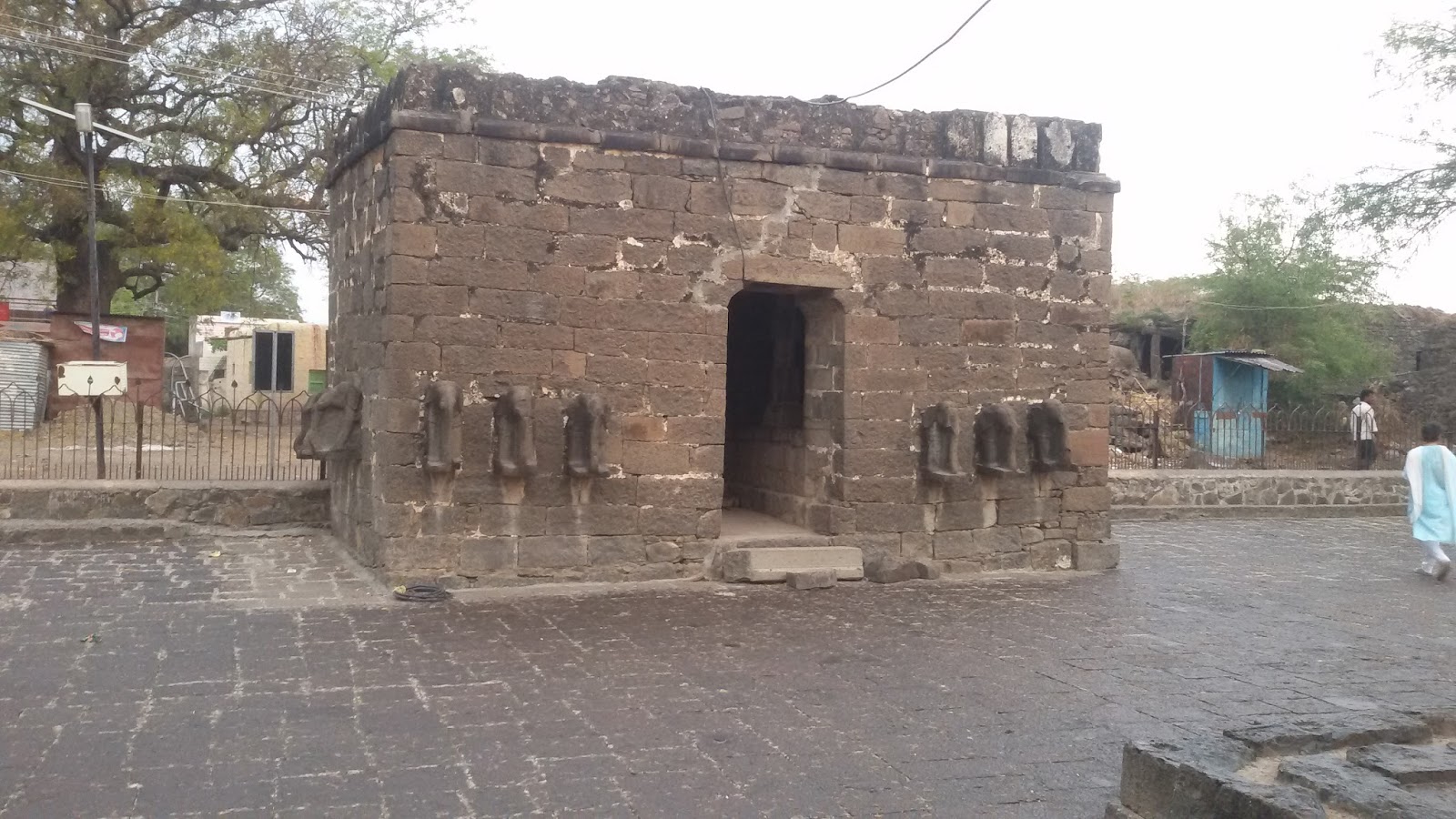 entrance from the other side
Elephant heads surround the entrance on all sides.

The main temple building in the center. Apparently a worn out temple on the side.


The inscribed stone information proved difficult to interpret. I requested some Kannad speaking people to read but the script has undergone changes over a period of 700 years and could not be interpreted by them. The temple was built at a  time when Kannada overtook Sanskrit as the common language in this part of India.


If, you look at the pictures above, at first glance it looks Lord Shiva is on one side holding a drum (डमरू) and a trident (त्रिशूल ) and Vishnu on the other side holds a mace (गदा) and what must have been a conch  (शंख ) now seems broken. But on careful observation, Lord Shiva also has a mace and Lord Vishnu has a drum.
Many temples of Lord Shiva and Vishnu, in their various forms and incarnations, were built during Hoysala era. But sometimes, a combined deity of both called Harihara (हरिहर ) were also built. Lord Vishnu is called Hari (हरि ) and Shiv is also known as Hara (हर). Lord Harihara is worshipped both by Shaivites and Vaishnavites. Earlier, when I had ignored this aspect, I wondered where the other sanctum for worshipping Lord Vishnu must be. Now, my puzzle is solved !

Philosophically, this also denotes the unity of Lord Shiv and Vishnu. Lord Harihara is also known as Lord Shankarnarayan (शंकरनारायण). Shankar is Lord Shiva and Narayan is Lord Vishnu.
A pillar in front of the sanctum prevented me from taking a picture of them together.

The temples where two deities are worshipped and have two sanctum sanctorum or garbhagraha is known as Dvikuta (द्विकुट) Dvi is two and kuta is house. The temple but is named after one deity. Here, the name of the temple is Sankarlingam but two deities Lord Shiva and Vishnu are worshipped.

The prayer sanctum sanctorum or Garbhgriha (गर्भगृह ) or the "womb chamber" in dvikuta also are separate but here the deity is Lord Harihara who is unified Vishnu and Shiva so there is only one sanctum sanctorum. This chamber is the place where the main deity is kept and forms the most important part of a temple. Only the priests are permitted to enter this chamber.

This area is usually square and dark with no windows with deity in the center. The darkness helps a devotee focus and meditate.

A monolith Nandi, the mount of Lord Shiv sits outside the garbhgriha.

The golden head of Lord Shiva which you see in the corner is placed over the Shivalinga at the time of special venerations.

The mandap or the hall outside the sanctum santorum has beautifully carved soapstone pillars. 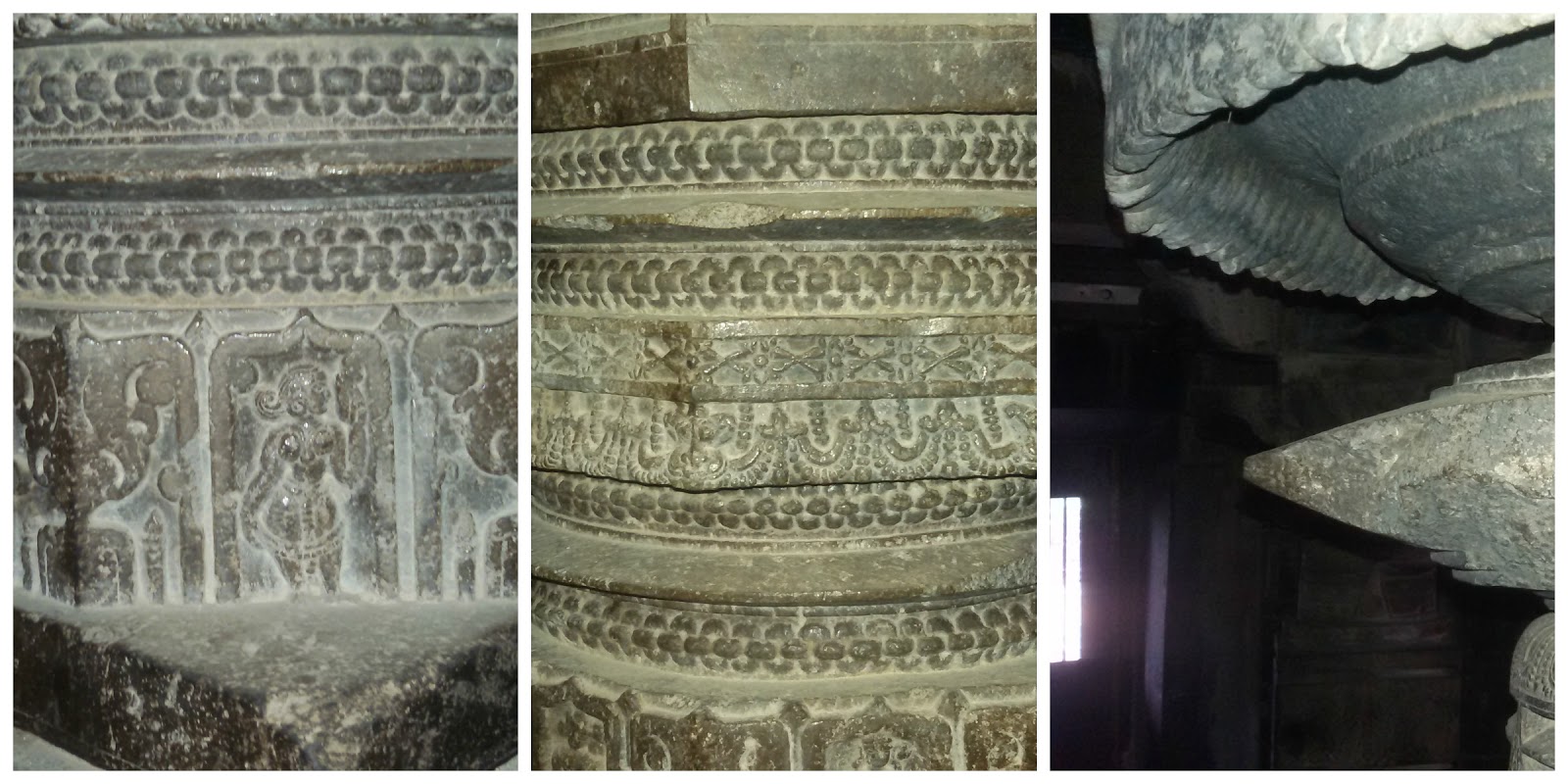 The ceilings too are beautifully carved.

Some etchings depict scenes from Ramayana.

All around temple on outside while doing the Pradikshana or circumambulations, one can see on the walls dancers in different poses, drummers, courtesans, Lord Ganesha, incarnation of Vishnu, and also scenes from day today life. 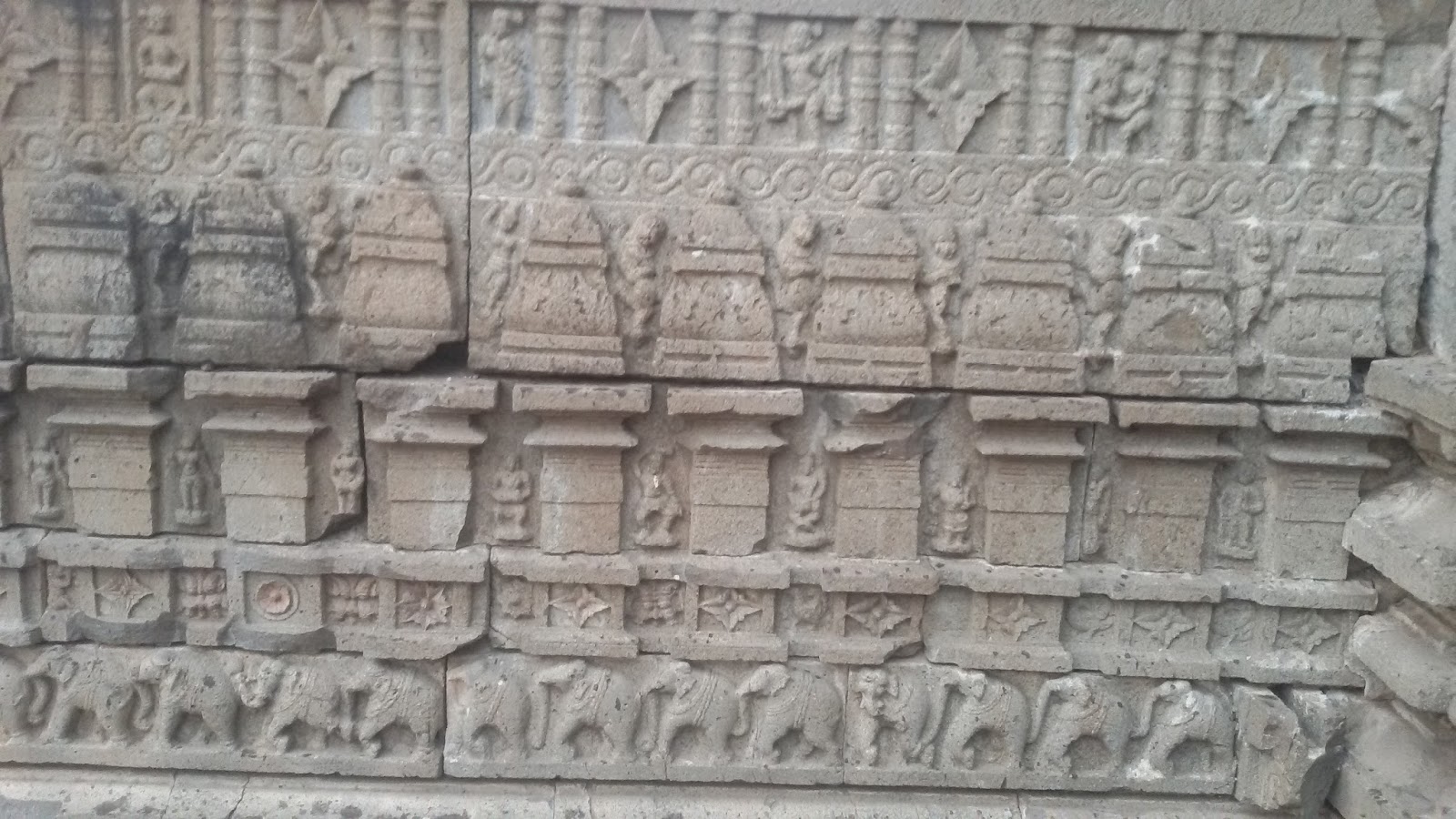 Starting from the lower most carving, we see a a row of elephants which denote strength. Above the elephants is a row of flowers followed by scenes from everyday life. Unlike some temples, erotica was handled very subtly and there was no outright display. One finds such carvings in inconspicous niches.

All around the main temple, stone sculptures are seen. 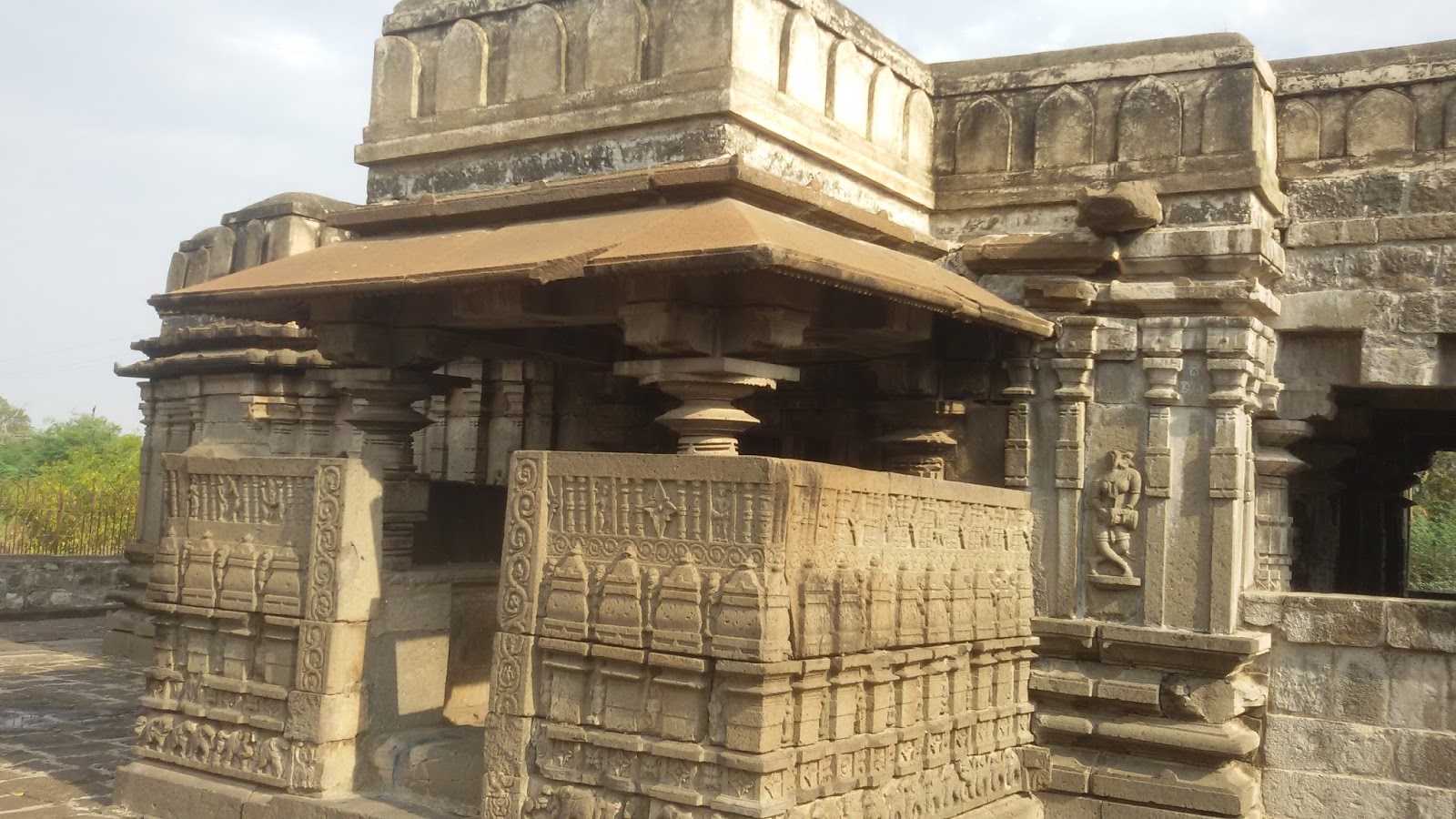 The temple has two side doors. They have two stone slabs for people to sit. 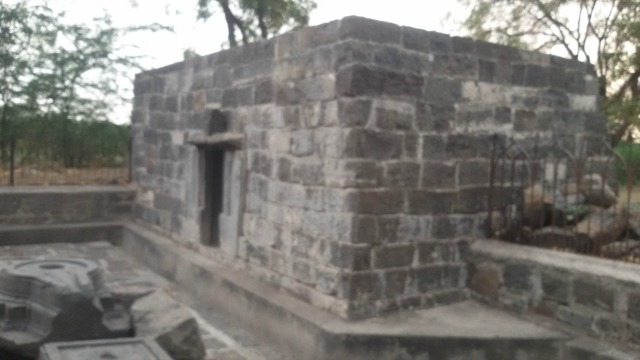 The above room on the side of temple is full of broken idols, artifacts. Picture below. 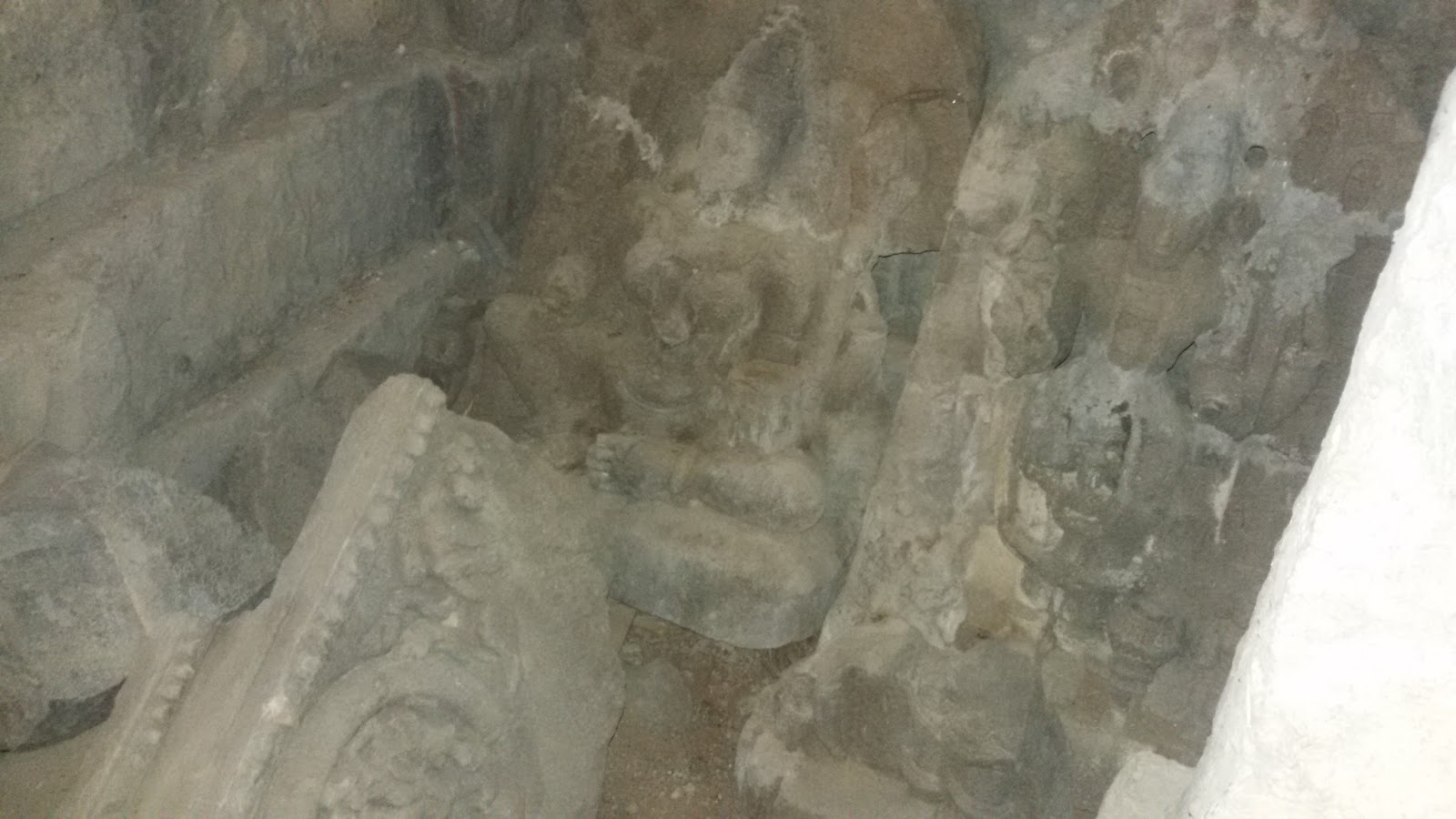 The room with plenty of artifacts which still need to be placed in their proper places.

My visit to the temple ended here and as we were going back, I saw a huge mound over dilapidated walls. 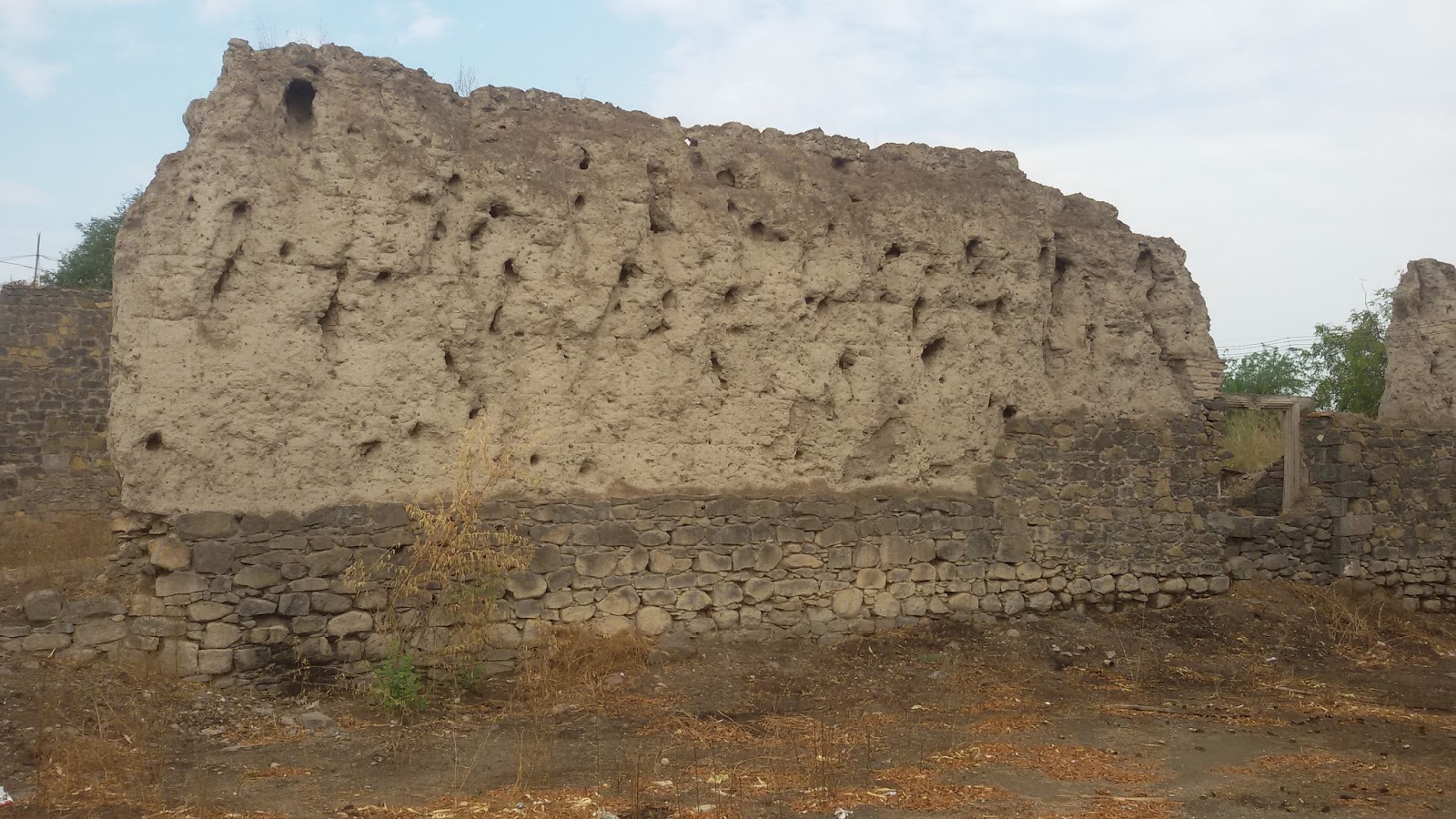 Any guesses for what this structure this? I was amazed when I was told that it was an ant hill.

This looks like a small fort now inhabited by ants!!

Plenty of work awaits ASI to document and restore this temple fully.
Posted by Vandana Joshi at 7:31 AM

Email ThisBlogThis!Share to TwitterShare to FacebookShare to Pinterest
Posted by anandjoshi at 3:53 AM